Full Name
Ahmed Tibaoui
Job Title
General Manager and CEO
Company
World Trade Center Algiers
Speaker Bio
Ahmed Tibaoui graduated from the National Polytechnic School of Algiers in 1974, he began his professional career as an engineer in telecommunications, then in 1985 he was appointed as Central Director at the Ministry of Commerce to set up a new quality management system.

In 1991, he was appointed Director of Studies at the office of the Presidency of the Algerian Republic where he was responsible for monitoring economic issues. Two years later, he was appointed as an adviser within the Prime Minister's Office and head of the executive committee in charge of creating a new investment legal structure for Algeria, to be then appointed as a Secretary of State in January 1997.

He is now the CEO of World Trade Center Algiers, a Member of the Word Trade Centers Association and the Chair of the Business Club Member Advisory Council of the WTCA.
Speaking At
Introducing the WTCA Trade Services Operating Manual
Panel Discussion: Membership Models for WTC Business Clubs 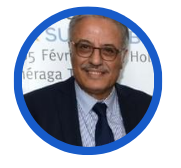